In the morning, first it is the back which protests, then the hip as my feet hit the floor and finally the crick in the neck , and the day becomes set for battle against the things of the sunlight, the externally imposed shoulds of the real world, the lowering of rigid schedules upon my  heart, which coils within in response to the body’s bracing against the light.

Spirals, ancient symbols revered worldwide by early peoples, from Celt to Canaanite, native North Americans to Maiori, found in petroglyphs, drawings and ornamentation, have come to figure strongly in my own search. They can run counterclockwise and clockwise, but each embodies each direction. Moving from a tightly coiled, but infinite center, it moves inevitably toward a releasing, a flowing which expands without cease. The coiled center possesses power ready to be unleashed, a spark, a flame, a birth. It is believed the counterclockwise spiral represents rising, ascending, as the sun, while the clockwise spiral denotes descending and opening, widening into infinity.

As my body and heart react to external forces during the day, I come to realize the movement is counterclockwise, a soldier armed for the battles without, ready to fight the imposition of elements  beyond my control. Uncoiling, to  change the flow to a descending clockwise direction, I feel my spine straighten until energy flows, opening my heart to release the twist within, to soften, expand.

I descend as the sun, the added nuance of my reality, a relief from the blazing light of noon, becoming a world of mystery and wonder where all is possible and dreams dance before my delighted eyes as I explore the universe of infinities. 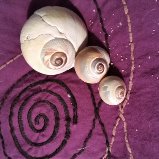 The draining of water from the Little Pamet into the harbor, immutable throughout centuries of changed courses. Storms, ice, glaciers and mankind have all had their effects, yet the element remains, following its own laws and design, its compelling need to flow in concert with the Earth, moon and universe.

We are tiny particles of water, at the mercy of universal rhythms and truths, given consciousness and soul that our tininess finds commonality with unimaginable vastness.

We have named these truths, this vastness, a multitude of names. Entities have appeared to guide us to the design, to the universal laws. We, by the very nature of our best being, seek our place in this scheme. We search for answers.

Perhaps we simply watch the sunlight play on the water, or the slow cycle of stars through the sky, or the curiousity of a new foal safe at its mother’s side. We come, eventually, to the realisation that we are part of something indescribable. With this come the words ‘grace’ and ‘blessing’.

The water lives in grace and blessing.

until rugosa dazzle their vividness

floating grains around to settle anew

to tiny splashing fish ahead

circles about at mercy of currents

reflected in water carrying into depths

all becomes one great embrace